Partagás. by Val.
Partagás is among the oldest brands of cigars in the world.
It was established in Havana in 1845 and is still produced in Cuba for Habano’s SA, the Cuban state-owned tobacco company.

“Don Jaime Partagás y Ravelo was the son of Jaume Partagás, a tailor, and Teresa Ravelo.
In 1831 he immigrated to Cuba.
Upon arriving in Havana Don Jamie started working  for Lloret de Mar businessman, Joan Conill.
After a few years, he branched out on his own, and in 1845 established his factory:
La Flor de Tabacas de Partagás.
A strong businessman, Don Jaime owned many of the best plantations in the Vuelta Abajo tobacco-growing region of Cuba.
As a result, he was able to select the finest tobaccos to be found on the island.
This led to Don Jaime’s “Partagás” cigar having the flavour & aromas that kept people coming back & made the brand incredibly successful.
It is suggested that Don Jaime Partagás y Ravelo was a curious man, experimenting with various methods of fermenting and aging tobacco.

Another of Don Jaime’s claims to fame is he’s credited with installing one of the first “lectors” to read to & entertain the cigar rollers as they worked, a practice which continues today.

Before and after the Cuban revolution, the authentic Cuban-produced Partagás was, and remains, one of the most sought-after and highest-selling cigars in the world.”

Partagás cigars are full flavoured.
Once you’ve tasted a Partagás,
the experience will be burned in your memory.
This is due to their earthy aroma & taste, which comes from the
filler & binder tobacco found in Vuelta Abajo.
Vuelta Abajo is a region unique in the world of tobacco & of Cuban tobacco
as it is the only zone that can successfully
grow all types of leaf: wrapper, binder & filler.

You can get  Partagás cigars in a variety of shapes & sizes, like the Lusitania.

… but, according to “The World of the Habano” Partagás is probably the best known for the Serie D No 4, a robusto that dates back to the 1930’s. 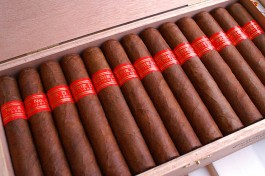 Other nominees in the “Best Brand 2016 Cuba” category were:
Cohiba. Montecristo. Ramon Allones. Trinidad.
And the winner is: Partagas.