Since August of 2015 I’ve been a weekly contributor to Smooth Draws Radio Show.
Friday January 20, 2018, the driving force of the show, Gary Laden, passed away and it’s been heartbreaking.

Gary will always have a place in my heart.

I started listening to his broadcast, then called Cigar Guys Radio Show, basically from its inception.

The 1st time I called into the show was in April of 2015.
The Cigar Question of the Week was:
“What do you like to pair with cigars?”

I wanted to get his take on a Brad Paisley interview in Cigar Aficionado, quoting this from the pages of that issue:

“His (Paisley’s) band members tend to enjoy the cigars while sipping a fine whiskey, or a glass of wine.
But the nondrinking Paisley has his own favorite beverage when savoring a cigar …

“If you have a Yoo-hoo with a cigar, it’s like a s’more,” Paisley enthuses. “Anything chocolate is fantastic. A hit of chocolate takes the bite away. A chocolate milkshake with a cigar? That’s just decadent. Grape juice is good, too. Anything thick and sweet is pretty cool. I think I’d like port, if I did that.” … from Cigar Aficionado

Gary thought that was great input and I thought Gary was great for being so open-minded about cigars & pairings. 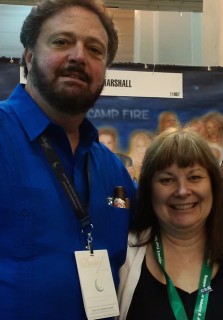 When he learned I’d be working with Daniel Marshall at the Daniel Marshall Cigars and Humidors booth during the International Premium Cigar & Pipe Retailers (IPCPR) show in New Orleans that July, Gary came by the booth and that’s where I had my 1st of many photos taken with him.

A couple of weeks after #IPCPR15, I asked Gary if I could do a Twitter #CigarHerf to correspond with the show broadcast.
He loved the idea and couldn’t wait to get a global ‘herf started every week.

Gary would send me the script and I’d tweet the content, with corresponding pictures of the hosts & the guests – of which there were many, but some of the 1st were Jose Blanco, Oscar Rodriguez, Mike Bellody, Nick Perdomo Jr., Fred Rewey, Jerry Garrett, Sean Williams & Enrique Sanchez Icaza.
#RelaxAndEnjoy.

I’d categorize all the segments & photos that made up the show.
There was Doc’s Diversions and #SmoothDraws-University that brought together great educational aspects of cigars, like Jorge Armenteros of Tobacconist University.

And who didn’t love the ever popular “Long Ash or In The Trash” where the hosts would give their opinions on super-fun themes that Gary would present?!
All the Smooth Operators had fun casting their votes on the topic throughout the weekend.
Recently the panelists expanded to include Smooth Operators, with long time listenere Bob Langmaid being the first.
Gary was always looking for way to get the fans onto the #SmoothDraws MainStage.
A totally generous man.

Gary created a segment for me to talk about wine & spirits and was always eager to try a new “dram” … a word he found particularly endearing.
The segment we did for Canadian Whisky gave Davin de Kergommeaux’s book “Canadian Whisky – The Portable Expert” a boost in on-line sales throughout the U.S.A.
It was those behind the scenes experiences that made the show so exciting & gave me a sense of purpose.
I will forever be grateful to Gary for seeing the big picture.

We were part of Whiskies Of The World #ATL, where Gary, Nicholas, Adam myself & others from the #SmoothDraws Team would host the Cigar & Whiskey pairing event.

Gary was one of the 1st radio celebrities in the United States to honour World Whisky of the Year winner Crown Royal Northern Harvest Rye, enjoying an in-studio tasting with John Stegenga & Alan Friedman.

Gary warmly welcomed everyone to the studio, whether they be cigar people or whisky people … like Raj Sabharwal.
“Doc” loved Scotch … and he loved Canadian Whisky.
He found a new favourite when Raj brought in Stalk & Barrel Whisky for the in-studio tasting.

I’ll always be grateful to Gary for making the show diverse, yet keeping it related to the #Cigar lifestyle, which he loved.
And he fought for #CigarRights … supporting the mandate of Cigar Rights of America and International Premium Cigar & Pipe Retailers (IPCPR).

He completely embraced every aspect of the cigar lifestyle, working tirelessly to secure interviews from influencers of that lifestyle, including Reinhold Widmayer from Cigar Journal to Darren Cioffi of Cigar Smoking World Championship fame and Franca Comparetto of Cigar Sense.
Every interview brought new insights to great cigar experiences, illustrating the never-ending optimism that cigars bring, like the journey of Hamlet Paredes & Rocky Patel Premium Cigars.

And, of course, there were the hundreds of followers – the #SmoothOperators, who tuned in from all around the world.
Gary loved each and every one of you, truly embodying the cigar-lifestyle mantra of us being one big cigar-happy family.
Gary was especially fond of being able to meet so many of you at the various LIVE remotes the Smooth Draws Radio Show did.
He’d even get on the phone to talk to fans in other countries, like Kenneth Rosal & Mike Simpson in Canada.
Gary also enjoyed seeing & hearing from Nigel Baird from the U.K. … whose cigar & accessory collection astounded him!
Every single Smooth Operator was important to Gary, and to name a few … Vern Coleman, Wes Smith, Travis Burne, Ricardo Nascimento, Nathan Caliendo, Craig Graydon, Jerry Vogler Jr, Jeff Botl, Gerald McIntyre, Lloyd Bunce, Don Stuike, Cliff Wilson … and so many more!
Gary would have loved to have visited each of the 44 States & 24 Countries that had Smooth Operators tuning into the show to meet all of them personally.

#SmoothDraws just kept getting bigger & more successful over the years, with Nicholas Syris, William Cooper, Michael “The Burner” Turner & CigaRobbie coming on board as hosts through the history of the show.
Their expertise, cigar knowledge & stellar reviews had a big impact on all the #SmoothOperators.
The #SmoothDraws #CigarHerf was a global meeting place for everyone to ‘herf on Saturday. Jenny Hatton was brought on-board as one of the #CigarHerf coordinators.
Coordinating the phone calls behind-the-scenes was Adam Heffner, followed by Jay Finch.

Gary especially loved having his adored wife, Susan Fidelholtz Laden, with him in-studio, as well as behind the scenes of the show.
His friendship with executive producer Chad Potier serves as an inspiration to how cigars can bring people together in unexpected ways.
#Shenanigans!

Gary, myself and all the Smooth Draws team, did so many things cigar-related, and we bonded over many premium cigars.
I visited Atlanta on a several occasions for some great fellowship & event attendance.
We traveled as a group to Nicaragua for our inaugural #PuroSabor experience in 2016.
The very 1st night aboard the Lake Managa cruise, we were able to meet Eric Newman of J.C. Newman Cigar Company, who later came on the show for a 2-part interview about the history of his cigar company.

While in Nicaragua, Gary particularly enjoyed the visit to Flor de Caña Rum … and who can blame him? It is really a fun place to visit and perfect for picture taking, with the Flor de Cana Train!

The following year, Gary & Nick did the Smooth Draws Radio Show show from the Plasencia Cigars Factory in Nicaragua.
A ground-breaker in cigar radio!

Whenever I was around Gary & the Smooth Draws Team, I always had my camera ready, to capture and archive, various cigar & cigar lifestyle photos to have on hand in case we needed them for the show.
This week, during Nicaragua’s #PuroSabor18, some of our friends & #SmoothOperators like Rod Zdebiak & Tomz Cigarz, have been posting fantastic photos of their experience … and I’d think – “that’d be a great shot to include during the #SmoothDraws #CigarHerf” … only to remember that the show I’ve been a part of for over 100 weeks has now changed forever.

Recently a new segment was introduced on the show.  It was called: Legends of the Leaf. It was intended to profile the producers of cigars & such.

I think Gary Laden should be bestowed the honour of the Greatest Legend of the Leaf.
He dedicated his life to cigars and brought great joy to so many.
Truly a legend.
Always Remembered.
Never Forgotten.